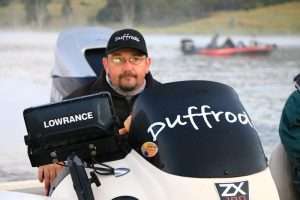 Duffrods custom fishing rods are back for another year as the presenting sponsor of the Duffrods Big Bag. Steve Duff has been building custom rods for decades, he also won the 2006 ABT BREAM Grand Final so he’s no slouch on the water.

Duffrods are relied upon by a large number of ABT anglers, so it’s fitting that the angler presenting the largest bag weight throughout a tournament weekend at a BREAM Qualifier or BASS Pro event takes away a Duffrod for their efforts.

The Duffrods Big Bag is open to both boaters and non-boaters, making it one of the most accessible sponsor bonus programs running.

All you have to do is present the biggest bag to the scales throughout the entirety of a tournament weekend. Just like Brad Hodges did at the Mercury Gippsland Lakes BREAM Qualifier, weighing in the biggest bag on route to his victory.

However, the Duffrods Big Bag isn’t always reserved for the tournament winner, Simon Marchant and Jamie Johnson came back in the final session of the BassCat Lake Glenbawn BASS Pro with a cracking 4.27kg bag which secured them the prize. In the case of the shared weight BASS Pro event, the boater and non-boater take home the Duffrod, along with a $200 Duffrods voucher, $100 ABT entry credit. They can split the prize up however they see fit.

“I’m really happy to be supporting ABT once again” Steve Duff commented, “Duffrods has grown thanks to the tournaments that ABT runs, so I see it as a natural fit to reward some of the anglers that succeed at every event.”